A collection of settings for the 8KX and 4090

Since we started sparking a talk about it, we could collect Game Based info on best practice settings for the HMD and Card to get 75 or 90 FPS.

Half life alyx ,everything on max ultra 90hz normal field off view…

For RE7’s VR mod, at least on the RT/DirectX 12 version, you can do all maxed setting(Save RTing and the settings you must disable for the mod to function) at normal FoV without FSR and do a solid 80FPS+

With FSR, you can turn on Ray Tracing and still do around 80 or so.

Large FoV can be done with all maxed(And no RT), but shadows on medium at around 75FPS with FSR. I would advise dialing down settings a little bit more to get something that’ll be more reliably over 75FPS if you plan to play on large, however.

Asetto corsa (the orginal) every thing on max ultra 90hz,normal field of view…

i don’t think i reach 90 fps in AC at Large fov with maxxed settings even with a 4090. AC when i check it in task manager, it doesn’t fully utilize the cpu or gpu.

I have been tweaking Assetto Corsa Competicione last night 90FPS and around 66-75 at start in Spa with 20 Cars. I will post the settings as an update. Pimax was Normal, 100% Resolution.

I also jumped into AMS2 I was totally wrong, had the graphics pumped up but only got 45FPS…

I did have some interesting effects in ACC first the CPU limited as soon as I went into a race and had other cars, hitting the AMD preset OC changed that so that I got around 7-10ms from the CPU. The GPU did not really want to go over 80 FPS at all with other cars on the track, only when I reduced the in game resolution slider far lower then 130% (100-120%) did it jump up. The interesting part was it was not fully utilized 70ish% but did not put out more FPS - seems there is another bottleneck like RAM Speed or something in the compositor pulling the hand brake since CPU and GPU had headroom and even the ms where around 10ms.

Edit
Onother interesting Aspekt, I had to stop using FFR, since exactly at the sweet spot of the left eye a square of badly rendered pixels was visible.

Try it with rain or at night…the fps goes down alot,and i mean alot!

i get nowhere 90fps with these settings,what where your ingame settings? 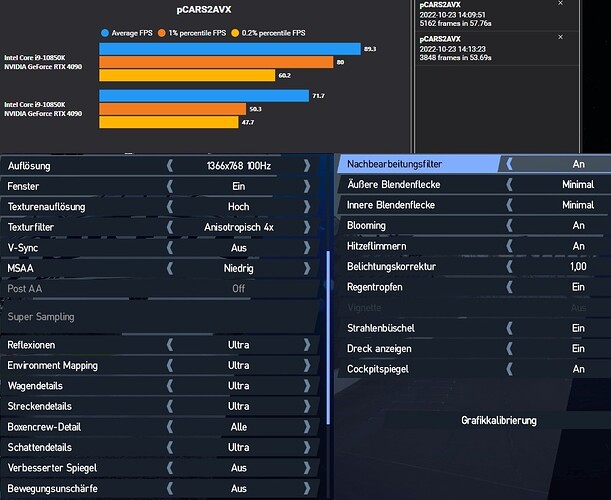 Strange i need to put steam vr on 100%. On 150 % is a no go with these settings…
Can somebody else try the settings from dstar too please… so i can compare

Hmm, are your nvidia settings standard? And how high ist the utilization?
You can use CapFrameX to analyze.the real GPU /CPU Load.

Without MSAA i also climb past 80 at night but there is still some a bit flicker despite the high SS. But on low is enough.

Hmm, are your nvidia settings standard?

i have the powermanagement on prefer maximum performance,vertical sync off,texture filtering on performance

fxaa off, ansitrop by game?

yes,are you realy sure you are on 150% steam sampling?

jupp BUT NORMAL FOV - ALL REPRO OFF (Smartsmooth + SteamVR!)

please, can you run a superposition test in performance in 4k ?!
Superposition benchmark | UNIGINE Benchmarks