Unfortunately that is largely the case for now, although they have started to whitelist mods that can’t be used to cheat.

Eg Reshade (although a few people have mentioned how it could potentially be used to cheat, but ofc not why the majority use it), Linux via Wine / Proton is being looked at as those users can no longer play. I hope VorpX will be reinstated, although personally I have never had any luck getting it to work with Pimax and SC long before EAC was introduced.

But anyway, sounds like it’s not your thing so no worries

I’m not sure that a VR mod would/should not be considered cheating. I’m not familiar with SC gameplay mechanics, but in a shooter like GTA V, playing in VR against flatscreen adversaries would give you an absurd advantage.

Aiming with your gaze is way faster and more precise than using a controller or even a mouse. For instance in pancake GTA V it’s basically impossible to hit anything when shooting from a car, whereas in VR it’s one headshot after another. Additionally, being able to look around using your head, and having a much wider FOV, gives you a spatial awareness that you can only dream of in pancake mode.

I guess that a solution might be having VR-only servers, but VR needs to become much more popular before that can happen.

It depends on what they define as “cheating”. Simply using it to brighten up dark areas could be considered cheating.

but in a shooter like GTA V, playing in VR against flatscreen adversaries would give you an absurd advantage.

Not neccessarily, it depends. Your reaction time might be less, having to physically look around might be slower, plus factoring in your tolerance for motion sickness…I see lots of potential for disadvantages.

Although I do agree with you GTA is shocking how you did the gaze based shooting it feels almost as natural as if it had real motion controller support.

Ah sure. Well, that’s tricky. The game doesn’t, by design, separate PvE from PvP too much, nor even players from AI. You can tell, but for example some bounty hunting missions and counter-missions only just about make it clear when you are hunting an AI or a player.

And that said, many players are there purely for non-combat PvE (eg mining, trading, search and rescue) so using these methods to cheat in PvP would only impact a small part of the game anyway. Personally I have little PvP interaction except for rare cases where a player attempts to randomly attack others ie griefing. Piracy is a (legitimate) thing, but not being a space trucker it’s not a personal concern.

So separate PvE vs PvP servers, let alone separate VR servers, will never be a thing in SC (doesn’t stop some players asking for it though).

It depends on what they define as “cheating”. Simply using it to brighten up dark areas could be considered cheating.

Yes that was the concern that a few players raised. But again it’s only really a PvP concern and it’s not a significant thing. Most players use it to enhance the game to their liking and for screenshots.

Right now you could turn off volumetric clouds in the menu and potentially gain more of an advantage than Reshade could offer if dogfighting over Crusader or Microtech. Eventually when performance is improved enough they’ll remove the option to turn off clouds completely.

Agreed. Some people are too sensitive.

E.g. No mans sky, Its primarily a single player game. And I use mods to increase speed of ship when doing cruise mode between planets because I prefer not to actually take 30 minutes between planets.

I also use a mod to reduce that ridiculous fuel cost for simply taking off. (I like to fly the spaceship over walking everywhere)

It could be considered cheating, but how is it cheating if it affects only me and my enjoyment of the game?

I like to fly the spaceship over walking everywhere

Tsk tsk you should get more virtual exercise

I get enough of that, I play with Cybershoes.

I’ve talked to a few people who have played both and, although they admit that more content will be nice, they’re still enjoying what’s out.

I also use a mod to reduce that ridiculous fuel cost for simply taking off.

@LukeRoss have you received a pimax yet?

I won’t argue with that.

Not sure if people here are aware of the Alyx mod that recreates the Bioshock world: 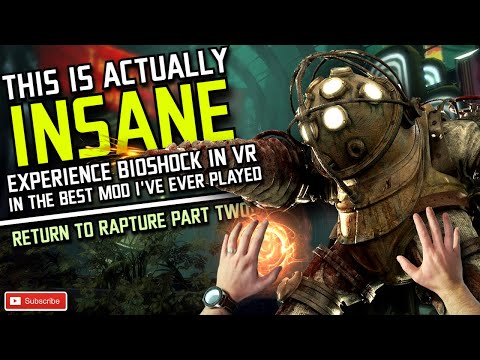 Yep. My favorite ALYX mod so far. Creator even went so far as to get permission to use Bioshock assets. Played it thru multiple times now.

Played it thru multiple times now.

How long does it take to go through? Would you say it feels like a " complete" experience? or just a fun demo of what’s possible?

I would say a few hours first time through. It’s more like chapter 1. There is more to come. There are 8 parts to dl currently.

I’ve started playing it the last week. Easy to install all 8 parts, that show up as chapters in the menu. It’s very well done, feels like a story driven/engine and assets integration/ best of both worlds Alyx and Bioshock. Respect for the mod creator who pulled this off.

On the other hand I signed up for the Luke Ross patreon site and tried his mod of RDR2 and maybe it’s just me but I’m having issue with a lag or warping as you move your head from side to side, which is probably “normal” since this is utilizing 3DOF I think on the HMD gyro only…kind of nauseating TBH and I have very strong vr legs …nothing usually phases me lol. So the experience is not as epic as I had hoped. Great effort by Luke Ross though. Won’t take away from that. YMMV.

@drowhunter @tykey6
Although someone who also likes to offtopic the forums, the content is slowly making me a bit confused.

You’re right…way off topic. How does this keep happening…