Just making a topic for people to post their images, impressions and general discussion.

Here are some pictures so far that I found: 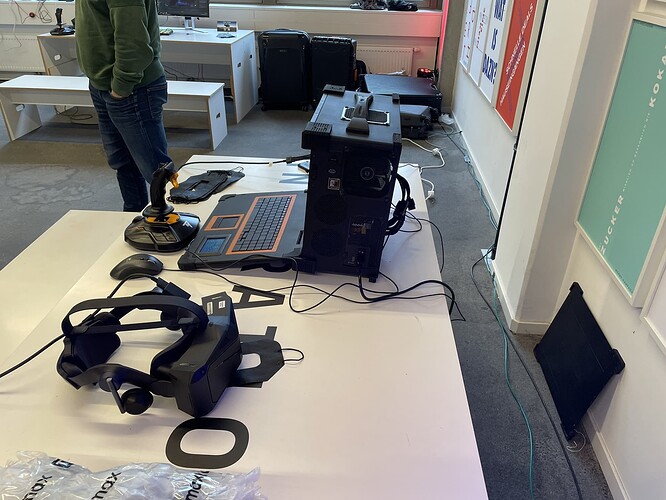 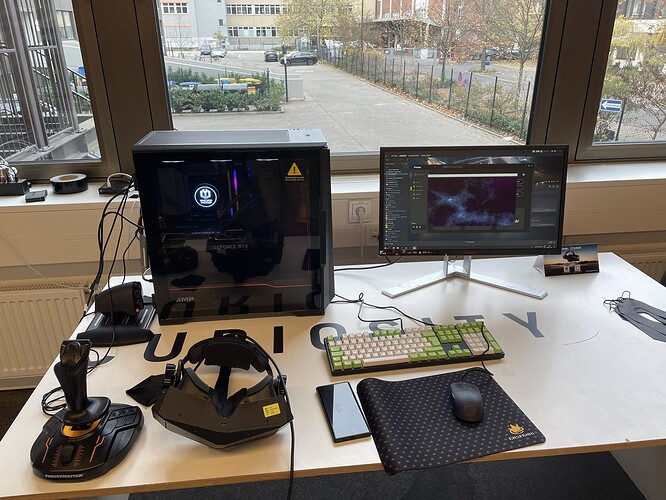 Also, Venom in the discord pointed out what looks like the battery dock in the background:

No sign of the controllers yet, but I guess this particular desk was maybe for flight simmers. There are 3 crystals going on at once, afaik.

This one seems to have the spatial audio module instead of the DMAS: 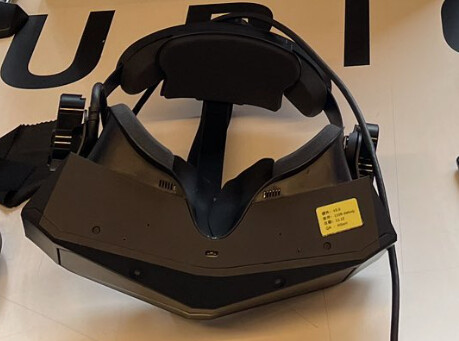 Edit: Also, not sure where the 30% smaller claim came from (not sure if Pimax ever said that or it was just a rumour) but the headset doesn’t look any smaller to me. It looks a bit narrower and a bit deeper? Could just be looking deeper because it’s more narrow though. Looks basically the same size to me personally, but not really a complaint as I was expecting it to be about the same size anyway.

Cool, hoping for some reviews soon!

I think it’s for customers who don’t like the headset, to put it over their mouths. Or fix any parts that fall of. Could be both.

We need pics of someone with it on.

I am taking all the drinks to chill. Jk, that did make me laugh.

There’s a discord user sprinting over to the location now (their train was late) so hopefully should get some decent impressions in the next hour. The are doing a QnA on reddit but I’ll compile the responses and post them here.

They should first send a selfie of them holding a banana next to their head for scale.

Not all bananas are the same size though. Lol

Ah you’re just standing at a different distance is all.

I thought you were going as well?

Heading to the Nov 30th one!

No word on it yet but they said it would be there, with the VR version also. Still waiting for that 1 discord lad to get back to us.

I don’t yet grasp how the design of the Crystal shown on those fotos would allow for the eye-relif range that @PimaxUSA had shared with users. Please check out that feature @SmallBaguette

Other than that, the double headstrap design looks intriguing, as well as what looks like a signal in adpater on the left side of the HMD, connected to the standard Pimax cable.

If I was to wager, that box is just an extension adapter so they can plug/unplug the headset quick and easy without needing to remove and replace the face gasket eachtime. Not particularly useful for a normal user but in a test situation like this it would be handy.

And yeah, don’t see any hint of eye relief in those photos. I highly doubt it made it to the final version unfortuantely.

I was at the roadshow in Berlin today and have to say I have mixed feelings about the Crystal.

Fist of all the image quality was really good. Local dimming worked really good and I did not notice any borders >between the dimming zones. Also distortion and chromatic aberration were not really noticable in normal use.

On the other hand it was really apparent, that the Crystal is far from ready yet. They only had one station with >working controllers (and only with wired connection to the pc). That station also had some crashes. It seems that >software wise there is still a lot to do. Also auto IPD was not yet ready.

Also if you use it wired the cable does not include power deliver. That means you either need to use batteries or >run a second cable. Battery life is supposedly 30min (not a number from pimax, but one of the organizers).

Lighthouse tracking plate is supposed to be ready 1 to 2 months after the headset.

They also had the Portal at the event. The device is a lot smaller than I thought. Sadly they only had one demo >for VR and while it was better than I expected I remain sceptical.

If you have any specific questions feel free to ask

That 30 minutes claim is quite alarming, I can’t imagine that is true tbh. Is it even possible to drain a battery that fast? ha. Maybe there was confusion and they were talking about the 30 minute time slot alloted to each person? If 30 minutes is true then that’s a deal breaker. Doesn’t sound right to me, I’m also hoping they sort it out that it can keep the battery charged while playing PCVR.

Good to hear about the visual qualities and the local dimming.

Software crashing…can’t say I’m surprised tbh. Gonna be some teething issues for any early adopters I imagine, definitely worth considering if you’re willing to deal with that before biting the bullet.

1 to 2 months for the LH faceplate makes me think 2-4 tbh, with shipping and all else.

Portal sounds promising, could end up being the device to go for ha.

I’m saying nothing, but find it hard to resist….

LOL. Let’s await more reviews first, this is this just the first one. Yet me too was hoping for a more positive review.