I ordered a KDMAS from the store. Just got it: my 8K+ has achieved its final form!

So after I was unhappy with my SMAS (complete lack of bass, had to amplify the audio), I immediately ordered the KDMAS when I got an email saying they were on sale in the store (as I had given up my Kickstarter box back in the day for the 8K+ discount). Just arrived! I hooked them up, and now the audio quality is what I was hoping for - I was prepared for the worst when I first tried them out, but then I put on the ear-cups to turn them into actual on-ear headphones…damn what a difference that made, the bass made its appearance! They fit almost right over my ears (could be down a bit more)

Finally I can use my 8K+ by just putting them on and going, without feeling like a large part of the experience was missing/problematic (though to be fair, the headstrap design of the SMAS did leave plenty of room to wear my Sony WH-1000XM3 with it comfortably, even putting them on before the Pimax).

Having said that, I’ll still probably get the DMAS some day. But for now I am truly happy with my Pimax 8K+ in its “final” form.

How long did it take? I ordered mine a few days ago. At the time I placed my order the 8K+ only came with a very small strap. Then they finally put the KDMS on sale. so I grabbed it. I’m used to The Rift S sound set up. So this should be a step up.

Dreamwriter the speakers can move a bit up and down. Congrats!

I ordered it February 17, it arrived today. So like two weeks to arrive.

The KDMAS has only been available to order directly for a few weeks, how could you have ordered it 14 months ago?

Make sure you don’t mix the KDMAS and the DMAS (the latter isn’t available yet).

The only other way you could still be waiting on a KDMAS is as a backer box, in which case I hope you have been in touch with support. AFAIK pretty much all backer boxes have been delivered by now.

No, they cannot. They are at a fixed distance to the headstrap itself and only allow for rotation.

The only other way to seat them lower is to seat the entire headstrap assembly lower on your head.

EDIT: turns out I was wrong, helio was right,

Not correct the pole can slide up and down a bit where it rotates.

Now down a bit

Thanks for that; I had been pulling and pushing way hard on my speakers but your pics gave me the confidence to really yank em down and lo and behold, they did in fact move!

Fantastic, as tbh I was missing those exact few mms to get a comfortable fit.

Your welcome! Don’t recall if I saw it somewhere or discovered it by accident

I preordered the Kdmas on november 2019…

Don’t you mean DMAS? Or was this through a ticket as they didn’t announce a pre order on KDMAS and KDMAS was only unveiled and released in 2020; only said it would be available sometime in the future for purchase.

Maybe post your ticket & order number for @PimaxQuorra to look into.

For anyone that doesn’t know, there are three versions of the MAS:

Current state of the DMAS according to Kickstarter update: first production was hoped to start second week of March, with first shipments beginning 1 to 2 weeks later

What I recently received was the KDMAS - not as good as the upcoming DMAS, but a HUGE step up from the SMAS that was part of my Pimax Vision 8K+ package. 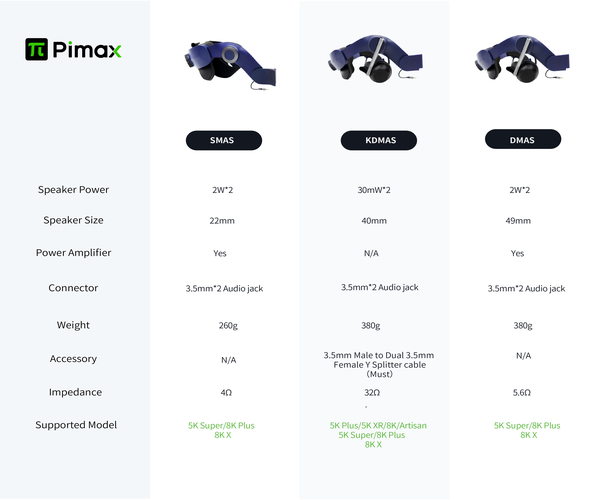 The KDMAS was only on the rack few weeks ago.
Are you sure you ordering the KDMAS instead of SMAS / DMAS?

You could probably share us the order number, we will help to check it.

This is likely related to 5k+/5kXR and og 8k not being able to use SMAS/DMAS. As Kickstarter Backers were given the KDMAS as a result the orders and pre orders from 2019 headsets with MAS.

Should also be receiving the KDMAS as it is the only compatible MAS for those headsets and should have had these sent out prior to new KDMAS orders.