Can somebody at Pimax kindly explain and link a source about what the hell UVI is and what that measurement means?

Because trying to look it up, I’ve found 3 different things, ranging from universities to bad eye disease, and I don’t think that’s what you guys are getting at.

So after ‚planning to anticipate‘, Pimax is now ‚intensely preparing to escalate the Crystal launch to a wider audience‘.

Same, very interested in seeing what this device could be. Perhaps it will be essentially an 8kx 2.0?

Lol okay. So, Pimax apparently made UVI, or Units of Visual Immersion the hell up and is judging themselves by their own metric. 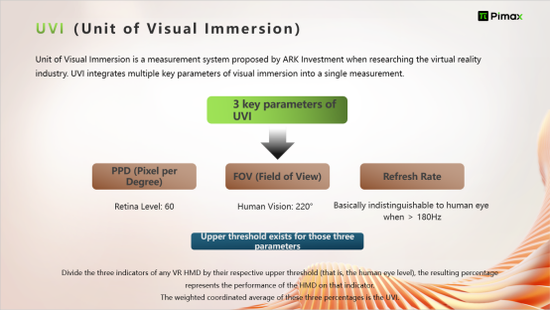 Can find it from this over on the Chinese web from a few months ago. Thanks to Cheesus Crisp for finding it.

Are you sure Pimax made it up? It says there that it was proposed by Ark investment, which looking into it said that they made it.

Go to page 26 of that document.

Pretty sure Pimax doesn’t own them.

It took me literally 5 seconds to type “Ark investment UVI” into google.

Did I miss something where ark said that pimax made it and they just agreed to use it or something?

Edit: Still looking, I can’t find any connection between Ark invest and pimax, and certainly can’t find any indication that Pimax made up those metrics.

It would be wise if Pimax stalled the 12K (officially they will of course only say it’s delayed) and instead focus on something which has a reasonable chance to leave their factory in fully functional state. Let’s see if it’s an 8KX Mark II or a 12K Lite getting rid off the overload of wishful thinking features which bloat the price, never get done properly and are not even necessary for the use cases of those who are willing to spend this kind of money for the device. And there may be differing use cases: PC VR simmers on one hand, immersive stand-alone exhibitions or training facilities on the other. Then just create two versions which are each focused on what the relevant use case truly needs, and unload the unnecessary features for each of them.

LOL… Yeah it’s still uncertain if this ‘launch event’ will actually be really that, so opening pre-orders. Or just sharing ‘more information’ about the headset. You’d expect the latter, since they call it a ‘launch event’ + they said they’d do pre-orders + they’re supposed to start shipping out in 7 weeks. But the terminology of the announcement makes me think it’s just about sharing more info. Guess we’ll see in 2 days.

Personally I’m not interested in the Crystal at all, I don’t want to go back to narrow FoV. I guess I loved my Varjo’s for a moment but when I switched to the XTAL I realized what I’ve been missing out on, wide FoV just adds so much more immersion! I guess I’m putting hope out of the fact that Kevin promised us that when they’d release the Crystal, the 12K should be around the corner. Though honestly I don’t believe that at all, but oh well …

My guess is a more budget friendly hmd.

It’s the only direction they could possibly go, right?

What is the Crystal Event? Is it a press release? YT Stream? Guest demonstration?

I hope all the Press channels are invited, Youtubers, open demos and no NDAs.

Or here’s another thought. Consider how well positioned the Crystal is to compete with the Quest Pro. Suddenly its $1800 price tag doesn’t look bad against the $1500 price tag of Meta’s much lower resolution offering.

Pimax could announce what is essentially just a different bundle that is the Crystal coming stock with the XR sleeve, and you’d have a very direct competitor to the Quest Pro. For just a little more price, you get 35PPD capability, DisplayPort, better audio, and likely better passthrough.

The Quest 2 Pro is Metas worse headset they’ve ever made. I mean they should scrap it. It’s a $799 headset at best.

Have you tried it? Anyone I heard of that has, has said that it’s pretty close to be being the best headset they have used to date. Even MRTV has been saying that.

Well, while I would have preferred to have some engineering types working in the field making the standards, rather than a bunch of bitcoin-peddling speculative economists (spits twice over shoulder), at least their method of calculating their “UVI” through comparison against arbitrarily chosen reference values for a limited subset of measureable factors pertaining to imagery, is undeniably a form of objective quantification.

That’s all the people they have bro, what do you expect? LOL.

It’s the Pimax 12K QLED lol. They just mysteriously want to make it a surprise lol. You know how they do in Pimax!

Anyone I heard of that has, has said that it’s pretty close to be being the best headset they have used to date. Even MRTV has been saying that.

I agree. However, every review I’ve seen has been unanimous in saying that the color passthrough is fuzzy and that it’s not possible to read text at all. And they say that the Pico 4 is actually much better in terms of clarity (but lacks binocular vision).

The use case that Meta has shown perhaps the most for AR is the idea of floating virtual screens. Especially using them to augment the small screen on your laptop. But the Quest Pro fails to deliver sufficient clarity to do this practically. Its VR display can’t do this, and its passthrough is worse.

That seems like an opportunity for a market that Pimax could pursue.

To be fair mrtv says that about every need headset. After the vive pro 2 I just stopped listening.