Woojer ryg haptic vest on Kickstarter. A new toy to use with pimax

https://www.roadtovr.com/haptic-vest-ryg-launches-kickstarter-fully-funded-3-hours/ have just seen & backed this project on Kickstarter.
It looks like a nice bit of kit & will definitely add to immersion of vr. Looks like they plan to ship in december so will hopefully arrive around the same time as my pimax headsets.
It looks kind of like hardlight vr which luckily I passed on as I wasn’t sure it would get proper support.
This looks much much better to me though & although they want devs to support it for some very specific tactile feedback

, it can be ran from a 5.1 surround sound source or stereo left & right for basic tactile feedback from any game.
Thought maybe some of you guys might be interested

OMG! This could be my next KS pledge!!!

gonna go see what they have to offer backers

Thanks for pointing that out to me!
Yes I love all the vr gargets.

For the vest I was looking into this vest that should be for sale around Christmas. 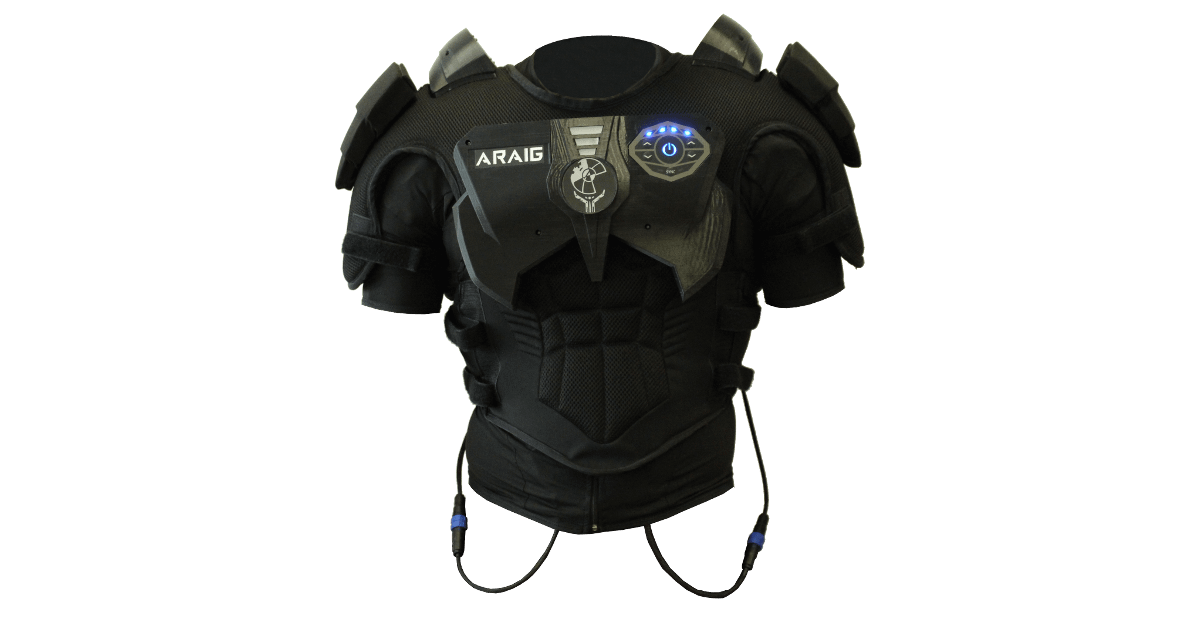 ARAIG As Real As It Gets

Finally you get to feel what you've only been able to see!

I think you can actually feel bullet hitting you and not just silly vibrations as the hardlight vest for example .

I have been told that the company making it is reliable and in health. So it is a certain product that would last and have a serious technical support

That looks really nice. Gonna probably go with that instead of the ryg one.

Looks pretty cool.
I’m not so sure why we would need speakers in the vest though.
Maybe it isnt aimed directly at vr.
The problem with all these suits is they need developers to implement their sdk into games for them to work.
That’s why I passed on hardlight & why i won’t buy one until it’s so amazing that all developers want to put in the work to implement it in their game.
I think https://teslasuit.io/ will be the big one to make that happen.
I have a SIM rig with 4 tactile transducers & although I have it set up in simtools now, I used to run it off of the sound output like one big tactile transducer.
Its still amazing feeling the rumble of the car engine, the feel of the road surface & all the bumps.
Space & comat flight sims are amazing running like this too, as you feel the thrusters firing up.
Essentially all these vests are capable of giving you the feeling of a bullet hitting you (some better than others depending on the hardware).
The problem is getting developers to do the work to make their game output the data for that.
I think compatability will always be a problem until these vests are selling millions & are a normal accessory for gamers.

I think the girl may have swung it for me, lol

as you feel the thrusters firing up. Essentially all these vests are capable of giving you the feeling of a bullet hitting you (some better than others depending on the hardware).The problem is getting developers to do the work to make their

I agree with u. The fact that the vest has the speakers , should mean that maybe was not thought natively for vr, but also might give the possibility to enjoy th vest for both vr games and not vr games

also, I agree all these vest have the same problem of being useless if they can’t be used in any game or just few games.

I am too dying to see rthe tesla suit released, but like you said, how many games would support that high end hardware capability ?

I need your help please with sim rig advices.

I am waiting for the 6 dof rig from DOFReality to be completed and be delivered to me.

What would I need to feel the rumble of the car engine, the feel of the road surface & all the bumps and the curbs?

Can you please help me to make better the 6 dof from DOF Reality please ?

Hope you enjoy your ryg. The wait is soon over!

I’ve had it for over a week now & i think it is fantastic.
I already own a sim rig with tactile transducers & also have used them direct from a sub output before so I kinda knew I was going to like it.

First off vest is great quality.
I couldn’t be happier with how it looks & feels.
I will be using this for pretty much gaming only.
Setup on pc was pretty easy.
It took about 5 mins the first time following woojers guide & download link to driver.
It will be much quicker after, once you know which settings to change.
In steam vr, I used the vive pro speakers as primary & i mirrored to the vest as I found for me, the other way around gave me quieter audio in the headphones.
This could have been a software glitch though.
I first ran it through PC usb, then through vive pro USB. No problems with either. From what I understand it you keep the same port each time, it should keep the same settings.
Ps4 pro setup was plug & play through USB.
It was picked up instantly.
I plugged my headphones in to the vest & had perfect game audio & mic functionality.
I’m still unsure if it is running 2ch or surround. Need to do more testing.
It feels great anyway though.

First experience on PC was rez infinite.
It definitely added to the experience.
Next on PC was beat saber. Spent an hour or 2 on this & it was a blast but some of the haptic locations got a bit hot from the constant bass.
not to a point where I was worried too much.
More just i could feel they were hot on me so i gave it a break for 5 to let them cool every now & then.
That is completely standard for all tactile transducers though. If they get worked hard for a long time, they get hot.
Beat saber is a bit non stop so I wasnt surprised.
Next was battlefield v on ps4. Wow. Loved this sooo much.
First time I put it on, I ran up to my friend in game & stood next to him aiming my gun.
as he started firing next to me, I could feel the rumble of his machine gun going through me from his direction.
Fighting in a town with explosions going off was so immersive.
when somebody threw an incendiary grenade at me, the vest let me know with a rumble all over as I burned.
You do get the vibrations from the soundtrack too, but theres no getting away from that other than if you disable music in game I guess.
I dont mind it at all though.
I’ve put about 4 - 5 hours in so far.
If I take the vest off, battlefield v feels lifeless now.
I did test some music & atmos demos which felt good, but gaming is where it is at for me.

This is as far as I have got so far, but I can tell you from experience with tactile transducers, that racing games will be great.
space games in vr like elite dangerous will be at a whole new level, as you will feel the rumble of thrusters. I’ll test it out with these in the next few days.

I had 2 friends test this vest (only on battlefield v) & both loved it!
1 friend wants to buy one now as he felt so involved with the game.
He felt it would keep him more awake & alert when playing late at night.

You will get the most out of this vest using it on games with bangs, explosions, gunshots, rumbles, road noise, engine noise, loud noises, music & anything low pitched & bassey.
At least until somebody uses the developers SDK to make a game where the vest will react to specific things.

I’m not sure how much skyrim will benefit. I will try soon. Im sure it will add to it but I dont think it will be game changing as skyrim can be a quiet game for the most part.
Loud rain should be a treat though.

I do think this vest is going to be too expensive for most people to want to buy one.
I think £250 would be a good price in the future to make it mainstream but what can you do.
You simply can’t get this level of 7.1 haptic feedback at this price at the moment.
It’s a quality product in my opinion & I’m sure it cost a lot in components & development.
I’m still 100% happy I bought it.
Maybe in a few years we will see this price as components become cheaper & everyone will want to buy one.

I have the strap last year, didn’t wear it much due to the heat generated on the transducer if i dial up the hepric feedback too high. Can’t imagine having all these transducers on your body. It would be like wearing a hot water bag vest. I guess it’s good in the winter

It only got hot on beatsaber after a while & I had feedback on max.
I played battlefield for hours & it didnt get hot at all.
It’s mainly constant music/vibration without breaks that does it with feedback on full
You could always turn the feedback down a bit. This would stop them heating.
Or if you go out on a cold day, put some techno on & you wont be at risk from pneumonia lol

I have also thought 250 would be a great price point and a must buy at that. Most likely never see that with the strap at 240 i think on the website. So glad i have it, it adds a level to the sound that you miss when off.