You guys see the new Cyberpunk Teaser for the R.E.A.L mod coming next week? 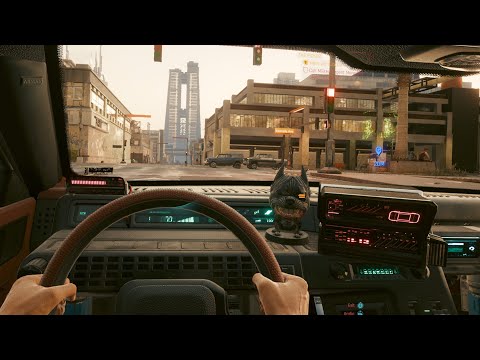 Thats already twice the frames i get from Vorpx’s version. (Although he also said Pimwx will get nowhere near that)

He also says all of the hud icons align and ui is readable.

I look forward to the polish Luke adds to his mods.

Vorpx took ALOT of work to get it running half decently. The addition of motion gestures for aiming down sight was surprisingly awesome and will me missed.

So looking forward to this…
Any idea of a release date? I just hope it reaches enough fps for it to be smooth and playable! So thats as near as possible to 60 fps in my 8kx or 90 in my quest2 or aero.
Edit: “next week”, right ok, excellent.

In his patreon post he said he was getting 60 while recording at 4k. Which is backed up by his preview video.

I’ve analyzed it a few times and the thing that I’m most curious about is how @LukeRoss dealt with the HUD.

The vorpx mod vanilla hud leaves the default Hud widgets slightly out of my view in the corners. I had to install Huditor which lets you rearrange the hud to pull it into the center a bit. The issue there is that it kind of sucks having to pull all of that hud so ckose to your forward view.

I cant really tell from the video but it would be cool if he set the hud up so it kind of allowed you to see all of it by kind of soft locking it to your head.

So say you wanted to see the bottom left corner, you would glance over there and mildly turn your head to left and down (say 5 degrees) and the hud could not quite move at the same speed as your head allowing you to easily view the whole hud.

not sure if that makes sense, but it looked kind he was doing this in his video but it wasn’t clear.

Is this expected to work with motion controllers?

No, none of Luke’s mods use motion controllers and he has already stated that he has no plans to add them for any future mods either. I personally am fine with that because just being inside of huge detailed worlds like this with a convincing 3d image is enough for me to have a great time with it. And the time for his mod releases would increase dramatically if he took on the extra burden of trying to figure out adding in proper motion controls.

I understand what u mean, Iirc that’s how the hud works in gta 5, maybe rdr2.

Thanks for the info.

To each their own. This sounds a lot like VorpX functionality which I loathe with a passion.

If I had to guess I would say next monday. Why?

If anytime after that he wouod also be missing february and would force all of the patreons to renew their memberships for march.

It sounds like he’s basically done anyway so I see no reason other than CDPR releasing a mod breaking patch on the 28th why he would drop the mod in March.

It’s not like it’s gonna be any more “done” a day later.

Of course there will likely be patches throughout march and beyond, I’m not sure how that works. If you get the mod in feb and then cancell and then he releases a fix in march. Are you screwed?

I’m not sure but i will be signing up for his patreon as soon as its released. I won’t stay a subscriber for continual months. If i like it and something like a game update breaks it i will just resubscribe to get the updated mod.

If you get the mod in feb and then cancell and then he releases a fix in march. Are you screwed?

You would have to re-subscribe to get the update

Yeah it is a lot like Vorpx except for me I have found that the 3d effect feels a lot more natural than what I get from vorpx. With vorpx it feels like a zoomed in screen to me, whereas Luke’s mods just feel like a normal 3d world without zooming. The downside to Luke’s mods is that the rendering method can lead to jittery gameplay unless you have a strong enough system to overcome it. My system is not strong enough, but I have no trouble with motion sickness so am able to overlook the inconsistent frames and have a great time with the games anyway. I’ve spent a load of hours in Red Dead, and played through Mafia 1 and 2. Played a lot of Mafia 3 also but haven’t beat that one yet as it is much longer than the first 2.

yep idk why but red dead 2 is smoother on luke s mod than vorpx red dead 2,now its a huge difference with pimax since on vorpx you need parallel projection,cant wait for cyberpunk,vorpx mod albeit i had playable performance the hud wasnt that great and for some reason on pimax if felt zoomed out even at max zoom in,its like i had 70 vertical fov instead of 100.

have you tried any of the mods with your aero any issues?

Up to now only Luke Ross’s GTA 5 mod. It worked ok. Fps was about 75-90. Things looked very sharp when fairly close, looked a bit rubbish at a distance. Had it on medium quality.

How does Immersive screen in Vorpx fair in that headset?

Does the resolution make it look more like a 4k monitor vs a 1080p monitor?

The good news is that several people out there are now working on a variety of solutions for transitioning older games into VR; in the end that can only be good.

RALF is very responsive to help requests, and he’s gone out of his way to try and support the Pimax community. I wish he had a better HMD as I believe he has basically the worst Pimax HMD imaginable (the original 8K). Pimax would be smart to send him an 8K-X today and the 12K monster when it comes out. RALF is very “VR” oriented and it shows; he seems to vastly prefer as close to a full VR experience as possible, even it that comes with significant compromises in terms of clarity. But that’s just his recommendations, you can always tweak things however you prefer, and it’s all pretty easy once you understand the software. But it’s going to be complicated; there isn’t any way around it. Motion-controller support is pretty good, if you want it, and the new Cyberpunk gesture-system will supposedly make it to other titles.

I will be subscribing to Luke’s Patreon-supported mods soon, just to give some of them a try. I’ve only held off in hopes that the remaining bugs can be worked out (Pimax, the ball is in your court!) Also just the time involved in yet another level of modding; I just have to wait until I have a real block of time. Obviously if Luke doesn’t plan on motion-controller support his approach sounds very different from RALF’s.

An then a completely different person (I think) went and released a mod for LiS Before the Storm, which supports the Index controllers (and others) brilliantly and run incredibly well.

A good time to be a VR user, that’s for sure!

I have made a guide with all of my findings so far.

So, I’ve been fiddling with getting Cyberpunk to look and play at its best for quite some time now. And I thought I’d share some of my findings. Keep in mind i have a 3080Ti so YMMV Download Download one or both of the following VR mods here Vorpx mod (Download for free) or the R.E.A.L VR Mod (Patreon) by @LukeRoss Both of these mod use a 3D technique called AER (Alternate Eye Rendering), which has some limitations with noise and ghosting when certain temporal filters are used. Also you…