maybe someone can help me with this topic. I want to improve the FPS and for that I came with the idea up to buy a new CPU (maybe). Does this makes any sense?
If so, which CPU would make the best deal?
(RTX 3080 is planned to buy)

Thanks for any suggestions!

To be honest it isn’t necessarily as simple as a cpu upgrade. This will depend more on Game titles you play. Some games are cpu bound and some are gpu bound. And some a combination of the 2.

@risa2000 and @Brogs I believe both have R5 2600x cpus. I have an r7 2700x. With the current state of changes coming it would likely be best to hold off on a cpu upgrade for the time being. And see how the new for example Ryzen 4000 series performs.

I do have similar rig. Same gpu. 2700x and 3200 ddr memory. Im personally holding off for 4000 series which is coming out soon . Also ryzen cpu s love higher memory. I would look into higher memory in your future build👍

The best cpu was the ryzen 2700 and 3000 and i could really feel a boost of performance when i got it copared to the 1800x. Reason is the 2000 series of ryzen became more intelligent than the previous ones

I think your cpu ryzen 2600x that you have right now is a good gamer cpu it have 6 cores/12treads.
Keep in mind that all games typical still is designed to run perfect on a quad core cpu since that is the average pc that most people have, and also designed to run with an average graphics card.
The 2700 and 3000 is also really good gaming cpus, but i would say the 2700 is a good buy if you consider it or the 3000… you DONT need the 3900x or other, what is important in gaming is you have 4 or 6 cores and a high speed cpu.

PRO TIP to get more speed out of yout CPU. Step 6 select normal ryzen power plan. Step number 7 will give you like 5-8% more fps in games and VR. 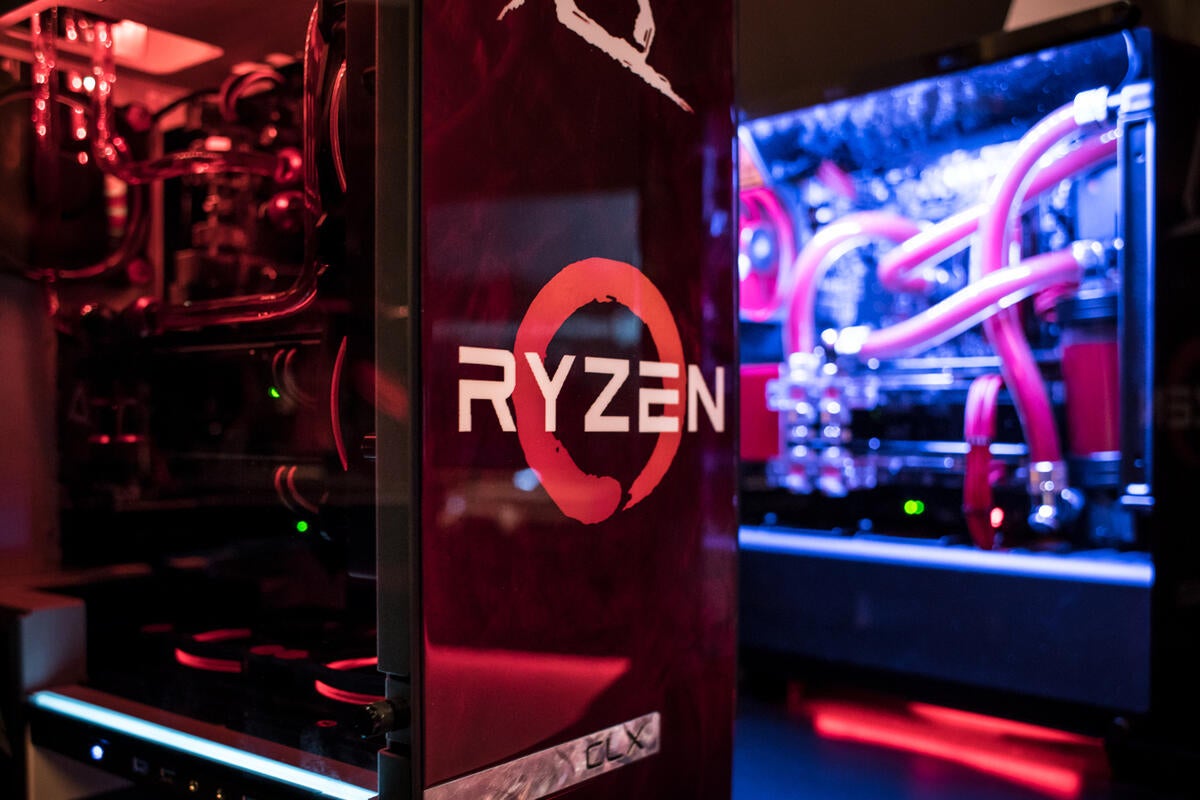 7 AMD Ryzen tips and tricks to maximize your PC's performance

AMD's new Ryzen chips offer killer performance out of the box, but these tips, tricks, and tweaks push the processors even further.

I think you should keep your ryzen 5 cpu, and buy the 3080rtx that you speak about… BUT maybe consider to buy and AMD graphics card instead. They talk about they will release it in 2020 and call it the nvidia killer

What i hear the amd graphics card have allot more ram, and is faster than nvidias 3800rtx cards so my advice wait and see what happen then next 3-4 month.
Nvidia will properbly release theirs in september and AMD 1-2 month after that… Just saying wait a tiny bit and read reviews.
Alternative when the new grapics cards come on the market then allot of used ones will be sold and you can get the nvidia 2080rtx series pretty cheat… ( they can play all games perfect in vr ).

Its is true that ryzen cpu love fast ram, i recommend 16GB of DDR4 ram, that run at 3000mhz
Remember in bios to select XMP profile els the ram will only run at 2400mhz
I can clearly feel a difference from 2400mhz ram and 3000mhz this is REALLY important for ryzen cpu to have fast ram… You dont need to buy ram faster than 3000mhz, since studys show you will only get a few % extra speed above 3000mhz anyway its simply become to expensive and better ot use money on anything els.

In the future you should consider upgrading your motherboard to the x570 series ( in example 2 years from now ). Reason is i think we fast are approaching the max bandwith of the PCI slot on your motherboard for how fast it can transfer data from the graphics card… The x570 series have the new pci 4.0 that is much faster… But today you dont need it, just keep in mind next time you upgrade motherboard its important to look for to get a "future proof motherboard ".

PS… remember to update your BIOS of your motherboard sometimes especially if you consider getting a new cpu someday. ( before you install it )
PPS. maybe watch some youtube videos where you see reviewers play video games and compare fps with different cpu models… that is the best way to know how a cpu perform in a gamer pc.

Good advice except Pimax does not have a good history of supporting and working with AMD gpus.

Thanks for all your suggestions!

Ok then I will wait until the ryzen 4000 series is released and how these will compare to my cpu.

For the GPU part i am not really sure if i should wait for Big Navi. Big Memory is importnant for the future but in two years there will be also new and faster GPUs. I need every percent speed what i can get (“reasonably” price, no 1400 Dollars or more for a 3090!) and the RTX 3080 will be 30 percent faster than a 2080 ti. Big Navi will be 10-15 percent faster. So the 3080 would be possible better for me. For upgrading a GPU 10-15 Percent ist not the best option for me.

The price of Big Navi will be in best case 100-200 Dollar of the RTX 3080. This is plenty of money but for speed the best option might be the 3080 after all. Or what is your opinion about that?

Thanks for your suggestions!

With GPUs I’d wait and see how they perform. Hopefully AMD continues to fix up some of their driver issues they had with the newer Architecture. I have a r7 2700x 1080ti system and and old i5 6500 with Amd r9 390 8g; this gpu worked great even when 4k/8k first released. In fact so well if I had known this ahead of time would not have upgraded to a 1080ti prior to receiving.

It is true that the 480x, 580x Fury and vega based GPUs have had issues on Pimax headsets. Something AMD was aware of their driver issues. However with new GPU series always best to give a few months after release to see how they fair.

Yeah i will wait how they will perform. The 5k Plus and the old 8K had/have somehow lower performance consuption than the 8k Plus or X. I could run the 5k Plus with my old GTX 1080 without much problems but with my 8K Plus even a 2080 TI is not enough for every game, especially DCS. I have know more stutter problems which one i can not solve, no matter what i do. But the low SDE and the sharpness is more than worth it

Indeed though until we have DeVs properly utilizing cpu cores with new game engines. Games like DCS are likely going to continue to be limited as they rely on single core performance.

This is where a console has an advantage as DeVs need to properly utilize the gaming console’s hardware.

But you have to overclock your cpu.
And don’t use auto OC. Do it manually.

Set clock in bios to 4100 MHz.
Set voltage to 1.3125 (it can be higher or lower, find what is stable)
Use amd ryzen master to monitor temp and voltage.

@Culver9
Thanks for your suggestions!
I will try out your mentiond point in the next few days.
My 2080 TI is already overclocked up to 2100 Mhz.
But the rest is not, even it should be quite obvious for me to do that also

If you want I will let you know, if my performance will be better.
30 percent would be very nice

Thanks again for your tipps!

Also for cpu you can use cinabench r15 and do single and multi core test. You can squeeze a lot from this 2600x. Even if you set clock too high, your PC will auto shutdown or freeze. It’s almost impossible to damage cpu or gpu in current generation. Just remember to keep an eye on temperature in stress.

For ryzen when you will do cinabench test, try to keep max temp ~85C
In VR you will never reach this temp, so you will be very safe.

When you find stable clock then try to lower voltage step by step by 0.025v until windows won’t boot or freeze. After that just add 0.025 and be happy with optimal OC

For gpu in VR you should keep max temp ~75C. Just change your FAN behavior like mine.

Don’t be afraid to play with voltage and clocks. As long, as your temperatures ok you will be fine. Try to find your maximum and then lower tiny bit to be safe in long session. And always remember that you can reset bios by pressing for 5 sec small black button on a back of your motherboard.

***Everything in this post is very basic. It’s good to find on google what is recommended max voltage for your specific cpu/gpu/ram. The values I gave you should be very safe. I think you can squeeze even more, but double check.

One thing to let you know. When you set cpu voltage and clock then keep in mind that it’s voltage and clock for ALL CORES. You can find on google that people oc ryzen to 5GHz with 1.4v. But this is single core. When all cores are in use, your voltage must be lower and you can’t set it manually for every core. That’s why try to find lowest possible voltage for ALL CORE TEST.
Your 2600x got max boost clock 4.2GHz but it’s never 4.2 on all cores.
That’s why 4Ghz or 4.1Ghz all cores >>> 4.2Ghz default boost clock

If you have any question I will be happy to help you. Good luck.

@Culver9
Thanks four your very detailed guide!
I am gonna try your suggestions!

@Skidrow
Yeah i gonna wait how all the new CPUs and GPUs will behave.
For the GPU, I think i will buy the 3080. Best option for Performance/Price (if you already have a 2080 ti).

Hello i have the ryzen 2600x with a gtx 1060,16gb ram and it works fine and i have no intention of changing it for a few years other than a upgrade of my gpu to a second hand rtx 2060 super when everyone trys to sell them on ebay as the 3000 series comes out.