It’s tough love for sure, but other than some sketchy nonsense about needing to mod beat saber in order to play it.

Nothing he is saying there is incredibly off.

I look forward to the lessons Pimax has surely learned from the 8K product line so far and that the Crystal and 12K are the perfect realization of the Wide FOV super resolution dream.

I can already see the potential of the auto IPD adjustment solving the offset issue Thrill was mentioning. 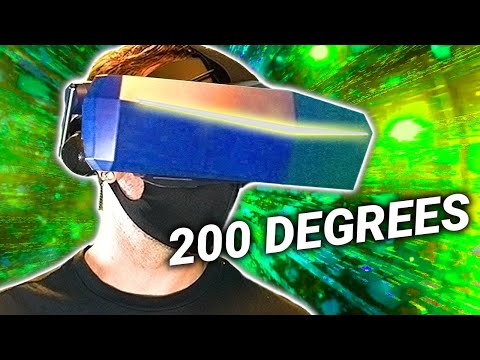 @drowhunter already started a thread on this

So Thrillseeker finally published his deep dive into the Pimax 8KX and swords and Company in general It’s tough love for sure, but other than some sketchy nonsense about needing to mod beat saber in order to play it. Nothing he is saying there is incredibly off. Hopefully Pimax can take his criticism constructively. I look forward to the lessons Pimax has surely learned from the 8K product line so far and that the Crystal and 12K are the perfect realization of the Wide FOV super resolution d…

Releasing new headset before fixing the old one?

That’s what pimax does all the time. I’m looking forward, other way - why I’m here? But I will never ever going to pre-order anything. No trade ins. I will wait for new headsets. Not only from pimax, view all reviews and see who is who.

@drowhunter already started a thread on this

The forum wasn’t allowing replies on that thread for some reason.

I think Thrill really hits the nail on the head with this. Like him, even though I love my 8KX, I rarely recommend Pimax to other people. For most people looking for the best all around VR headset money can buy today, I still recommend the Valve Index.

The 8KX is more powerful, but very difficult to wield. I will only recommend it to the few who have sufficient technical prowess and determination to run the overall most powerful consumer headset on the market.

There’s also the Varjo Aero out there, but it’s very specialized. It has one very strong feature, and then completely lacks in other areas. Most people I’ve met need the stuff the Aero left out.

What holds back Pimax is never quite finishing their products. It’s left to their customers to fix or discover workarounds themselves for whatever Pimax never addressed. Pimax enjoys a customer base that does this, but that keeps it small and niche. If Pimax wants to grow its customer base, it needs to make its products accessible to average customers who are not so technically savvy and determined.

I think this may be exactly what Pimax intends to do with the P3 platform.

I used to be very confused about why Pimax released so many different headsets, but I’ve come to realize that they’re all actually the same headset (P2) just being released at intermediate stages of development. Pimax just continues development and fixes issues in the next iteration rather than spending much effort on going back and fixing the old one. There is value to this approach as it stays laser focused on advancing capabilities past what other VR headsets can provide… if the customer can get the damned thing to work.

P3 could be the culmination of the development strategy that Pimax used with the P2. Taking everything Pimax has developed and learned and finally building a truly finished product with it. I see signs of everything seemingly coming together for that purpose. That’s what Pimax’s trajectory looks like to me.

Another reason why is that P3 is too expensive to expect customers to keep rebuying the newest release. P2’s were only a fraction of the cost. While painful, there have been many enthusiasts who could afford to upgrade to the newest release multiple times. But when you reach $2400, there’s a lot fewer enthusiasts with the financial ability to shrug that off repeatedly.

Another clue comes from the MRTV interview about the 12K. Pimax mentioned building thousands of 8KX’s every month. But for the 12K, Pimax said they’re intending it for much higher production at tens of thousands per week. That seems like a strange thing to do for a VR headset which is twice as expensive as your current one. You’d expect to be selling fewer of them, not more. Unless you’re planning to finally stick with it and concentrate on that one product.

I suspect everything Pimax has released up to this point has us feeling like beta testers because we are and have been beta testers.

This is a lot of speculation on my part, and I could be entirely wrong, and Pimax will just continue doing the Pimax thing and release a not quite finished 12K and never finish it later as usual. But I just don’t see how that would work for them at this point. They need to sell a lot of P3’s in order for their plans for a store and native standalone apps to work. Pimax has alluded to needing and expecting to make a lot of P3’s multiple times for their business plan to succeed, and I don’t see how they could expect to do that if they continue the same as they did with the P2’s.

That’s why I think Pimax is and has been operating from a new playbook recently. I’m expecting a significant shift in company strategy going forward as P3 rolls out. And that’s going to amount to doing what Thrill is suggesting Pimax should do in this video.

Thing is, when you release a headset that’s not finished that’s what sticks in reviews and ultimately stops people buying. Even if the problems were fixed after the bad reviews go out. That’s probably what’s going to happen to Crystal by the sounds of it. If there’s wonky tracking, shaky WiFi, or dodgy eye tracking. People will wait for the 12k which Pimax say is out in 3 months.