Looks like there back at it again with 29 hours to go. Thoughts? 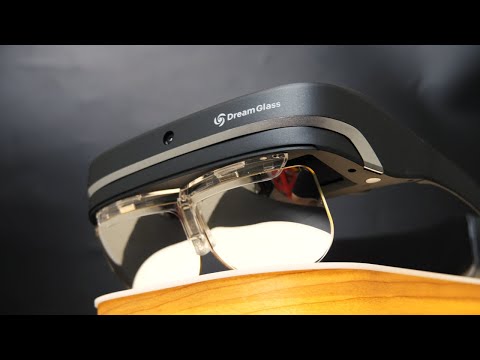 Generally not bad for what it is. I have the Dreamglass 4k.

Resolution is 3840×1080. It is not a replacement for VR even with the shade. The picture quality is nice due to using Mirror. Screen is very close to eyes.

The form factor has not evolved as other similar products that look like real glasses where this is more of a visor.

@Raujok can likely weigh in as well. It is more a viewer and is decent if you keep that in mind. With how close the screen is to the eyes maybe not great for idea if a desktop replacement due to text not being centered. Does have decent 3d effect when you turn 3d mode on.

so not good enough for console gaming from bed?

The new one is advertised as the “World’s first 200 inch (5.08m), 4k All in One AR, for Peleton, Youtube, Netflix, Zoom, Tik Tok and Instagram”. It’s meant to be a viewer, as Heliosurge says, but, more importantly, it’s portable. It’s also supposed to work with “Steam Game Streaming”, which I take to be a version of what Oculus uses.

The normal version is 3dof, the ‘Pro’ version comes with what looks like a camera and controllers, offering 6dof. Not sure how well this will work, it appears to me that the 3dof version is the primary version, with the 6dof version more of an after thought. They seemed quite surprised that so many of us wanted the 6dof version, and had to switch directions for their first sale on the fly.

Like Heliosurge, I have the first one, but, apparently also like Heliosurge, I didn’t do much with it. It was supposed to come out with an adapter to allow us to use it with our phones but that didn’t happen for over a year, so it sat on a shelf. When the adapters finally did show up(they ended up with two versions and sent both), I was involved with other things and just put them on the shelf with the Dream hmd.

Although the formfactor is more of a visor, it’s actually fairly comfortable. I’m looking forward to being able to more around the house with my screens following me! Should be mildly entertaining, at the least.

Is it worth it? Eh, who knows, but at $660us and the only Facebook competition for a portable set, albeit AR, I have to find out…

Agreed without the blackout shade it does worj well. So watch a how to/recipe and work on things. I have observed sone better looking projects with nicer form factors that might allow it for heads up display.

But @drohunter it would work fir console gaming with the adapter or as @stryr said possibly Android Steam link streaming. It is as he said comfortable to wear.

I did point out to them during the 4k campaign they shouldn’t advertise it as 4k to avoid the stigma that pimax faced. As it is not 4k standard ppl are accustomed to.

Just read an email from Nreal: apparently, Nreal is producing a competing version that only has a 130 inch screen, but they’re being touted as “Sunglasses”! Definitely a better form factor, it’ll be interesting to see! Both scheduled for release in late 2021 but Nreal is only releasing to Japan, China, and South Korea, with 2022 slated for the rest of the world.
Like a glacier, but things are getting there…

Not sure if same project. But did see one that the lite/basic had a form factor like Dreamglass and there elite was sunglasses. With that you could purchase a custom mini pc box with the specs you wanted.

The indiegogo makes it look like AR glasses … guess its not then.

Pretty much. Proper AR glasses really need a cam to be abke to recognize and utilize the environment. More of an AR overlay screen.