Can someone tell when the Pimax 12k with large FOV will be released? 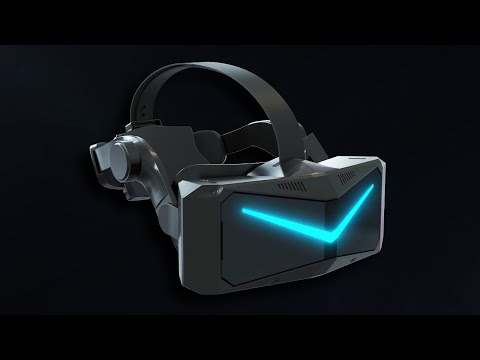 can someone tell when the Pimax 12k with large FOV will be released?

I have no interest in a small FOV.

At the time, Pimax communicated that the Pimax 12k would be released at the end of 2022.

now the year is drawing to a close. no information on Pimax 12k.

where can I order the Pimax 12k with large FOV???

were they empty promises again???

You know, Its pimax. 100% it will be delayed, a few times. It’s so quiet because nobody even expects it to be true for the end of 22

Pimax informed their audience that the 12K is at about 70% of its development, no further dates to its availability were communicated.

The Crystal is now expected to release March 23 at the earliest, with the 12K folllowing after that at some point.

First getting eye tracking to work over 200 FOV is very hard.

Thirdly Apple will release a headset that will be so good no one will look at Pimax in the same light again.

Then Valve will release a headset much cheaper than the Crystal and half the price of the Apple headset.

Portal will flop and Pimax will run out of cash because they’re burning 5 million a year in running cost.

Thirdly Apple will release a headset that will be so good no one will look at Pimax in the same light again.

Without VR controllers or games… The two will not be comparable in any way. I guess if you are into flight sims then maybe someone will hack it to work for that? It really won’t be competition though. Not saying it won’t be better or such in terms of display, optics, comfort etc just they really won’t be competing in any significant way.

Then Valve will release a headset much cheaper than the Crystal and half the price of the Apple headset.

Could happen, but could be 2 or 3 years down the line who knows with Valve. I think this will happen though, and probably next year imo but basically just a gut feeling ha.

If it does VR well enough then I think it will be pretty successful, particularly in East Asia. But only time will tell, you could be totally right. It’s definitely a big risk.

I think the 12K will definitely release, probably just the usual pimax thing of not having the FOV advertised but significantly smaller. It will still be beyond anything else in terms of FOV, will have the usual headaches requiring a technically minded tinkerer to really enjoy the headset etc.

I don’t think things are as bleak as you make out but I also do see a potentially rough year ahead. I think Pimax are making the right call right now to not set a new date for the 12k that they will inevitably just miss. I think they should delay it even further and switch to the XR2 Gen 2, but I don’t think they can take that much time tbh as they sold headsets to people based on the trade-in plan so if it goes on for much longer than Q3 next year (which it almost certainly will) then they are going to have a lot of angry people who bought headsets for the trade-in deal. It’s a tricky situation tbh.

I honestly think you are being somewhat overly dramatic by now.

We do not know if and when Apple and/or Valve are releasing an HMD and we know absolutely nothing of their possible feature sets and price. There are rumours but there have been rumours for years.

The Crystal will be Pimax’s Aero; roughly two years later to market than the Aero but apparently with some meaningful improvements over its competitor (FOV, colors, contrast) whilst maintaing some Pimax disadvantages (prototype stage, feature incomplete, build quality good but not excellent, expected modular shenanigans). I would expect Amazon.de availability some time in the summer of 23 and will most definitely give it a go to compare to my VR-3 (for which I have to renew an annual subscription of around €800 around that time).

I do not think I will keep the Crystal though as I consider its main disadvantage to be the form factor of the 12K housing, which is useless for a narrow FOV HMD and a development concession.

I do not know where the Portal idea will lead but maybe this is something that is enjoyed mainly by the Chinese market itself - it is entirely outside my interest.

The 12K I am sure will release at some point and a lot of the ground work is ‘financed’ by Crystal sales as the two HMDs are said to share a common basis. It will continue to be a tinker HMD as Pimax apparently chose to remain a tinker company.

I think that is absolutely ok and I appreciate that a company that is led by engineers and tinkerers manages to get the funding they apparently do manage to source.

It only starts getting tedious to deal with Pimax when you forget about this aspect; don’t take their word for anything, don’t preorder, don’t do trade-ins for future products, coupons etc. but also don’t get frustrated by having unrealistic expectations. This communication inbalance has always been Pimax’ weak side and it will not change unless management changes.

Take them as the tinker shop they are, enjoy the risks they take and let’s try and be somwhat appreciative of what so far, they have managed to achieve: a viable alternative to low risk mainstream vendors which comes at the cost of treating it like an evolved DIY project that can absolutely achieve memorable VR experiences.

I don’t think they can take that much time tbh as they sold headsets to people based on the trade-in plan so if it goes on for much longer than Q3 next year (which it almost certainly will) then they are going to have a lot of angry people who bought headsets for the trade-in deal. It’s a tricky situation tbh.

That is the big issue with the trade-in program, yes.

It was a clever move that now has the potential to cause very serious consequences, at least in markets with consumer protection.

This should be an official announcement ha. You summed it up well and I particularly agree with the part about appreciating Pimax. Hell, even if I ended up not getting any of these products for some reason I will have gotten hours and hours of enjoyment out of speculating, discussing, watching presentations etc. I do love Pimax products that I have owned so far (still kicking myself for jumping the gun and selling my 8K X to fund the crystal…lol) so overall I have a big place in my heart for Pimax as a company and you’re totally right to try and temper expectations and not get caught up in their communication style and overly optimistic promises.

I think they are an honest company and don’t lie, they still just don’t grasp timelines well. I know countless people and companies that always underestimate the time required for things (switch a company to sprints and watch them implode a month later when they realise how long it actually takes them to get stuff done ha). So yeah, let’s appreciate Pimax and while doing it try to even out expectations to something more realistic.

about the 12K trade in, as soon as my 8kx is 12 months old (summer 2023) i’ll be mothballing it so that i know it’s in good working order ready for the trade in. i’ll use a different hmd in the meantime, probably a crystal or quest 2 or 3.

If I consult my crystal ball (pun intended), it tells me the Crystal needs at least another 3-6 months. And if probably will only be at 95% by then, but become available nevertheless.

The 12K has engineering challenges which imho go beyond those of the Crystal (super wide FoV, bionic lenses, face/hand/body tracking) plus anything which hasn’t been fully resolved for the Crystal after all. So if they shift full focus to the 12K as of late Spring to Summer of 2023, I would guess it will take them another 6-12 months to get the 12K to 95% and throw it on the market. So that would result in it becoming available somewhere between end of 2023 through Summer of 2024.

That seems fairly realistic. Better to take the time needed and release something in at least a mostly functional feature complete state (although ideally actually consumer ready).

First getting eye tracking to work over 200 FOV is very hard.

That particular excuse, the way it was stated, I actually have issues with, just like I did back when it was used about the 8k series eyetracker…

The eyetracking camera sees the whole eye slit all the time, and while the eyeball swivels around, it does not jump out of its socket and move around, just because the HMD view happens to be wide FOV, so that it could leave the frame.
You are likely to lose some precision toward the edges, simply due to anisotropy, but I doubt this is as bad as all that, and I can’t help but feel like I’m being hoodwinked.

EDIT: What I do believe is unique to both the 8k series eyetracker, and the one in the new series (I could be wrong about that - it could be perfectly common), is that the cameras do not capture the eye directly, but look at a reflection of the eye, in an interposing surface. This solution could be due to the larger lens forcing the camera further away from the eye, making the shooting angle more oblique, and should result in an image less distinct, and with distortion caused by the projection. The new one in the Reality series also does this through the lens, which adds the lens distortion to this, also exacerbating the anisotropy matter.

We’ll see how things turn out, I guess…

can someone tell when the Pimax 12k with large FOV will be released?

This will be around the end off 2023 i think.Because the pimax crystal still needs alot off work(tracking,lighthouse face plate,and the most important part the lenses). But if they can fix those problems in the upcoming months it could get intresting.

We do not know if and when Apple and/or Valve are releasing an HMD and we know absolutely nothing of their possible feature sets and price. There are rumours but there have been rumours for years

Biggest issue with Apple they are known to prefer closed ecosystems. So more likely to be more closed like Meta.

Meta is wide open compared to Apple. Honestly meta are more open than traditional consoles even. Sidequest is available natively, you can side load APKs, supports PCVR for steam etc.

Apple is in a league of its own. Most hateful company im existence imo lol.

True Meta can be used on Steam. Where as Apple is likely to be iffy on pc support

If it exists, it will be 3rd party and I guarantee they will actively try to shut it down. I am extremely biased on Apple though so ignore me haha.

I don’t recall if Apple signed up for the standard of OpenXR. If they have we might(big maybe) see Apple hmd supported for use outside of there platform.

On the plus though if pimax really pushes getting OpenXR supported better through @mbucchia it maybe easier to get the driver going to have Finger tracking on the Sword Controllers. By eliminating needing to meet Valve’s share your code.