We’re about to start a roadshow through Europe and the US to meet with you all, and we’re bringing the Portal and Crystal for you to try out!

VRBLN is back with the next physical event at MD.H University near Tiergarten! Pimax is starting a worldwide roadshow with the first stop in Berlin, demoing the upcoming Pimax Crystal QLED, as a part of the new Pimax Reality Series of headsets.... 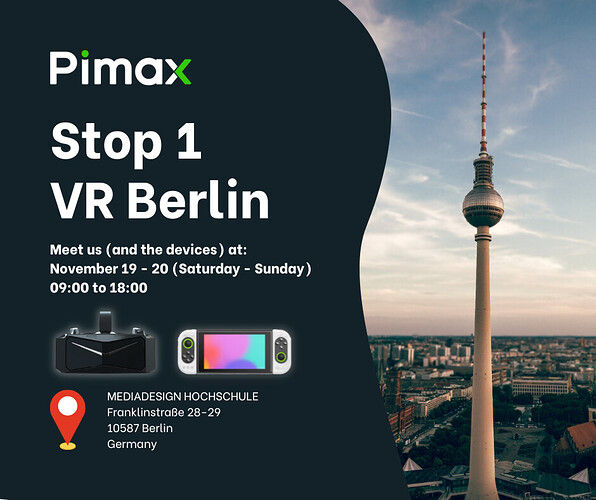 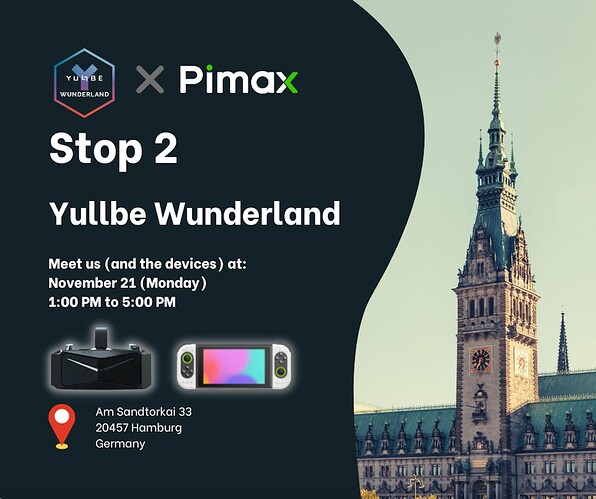 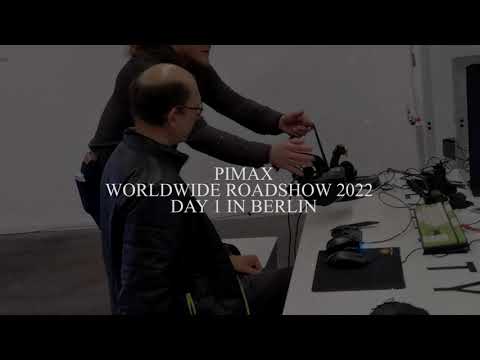 Will both lenses be showed on the pimax chrystal? I mean the lenses to get a bigger field off view?

yes ,there will be; This shop will be created by @SweViver

Really excited about this, we’re finally going to get hearing impressions and hands on with the Crystal and Portal! I think everyone here has been waiting a long time for this, so should be really interesting. Is anyone on the forum going to the Berlin event? Hopefully some people that get trying it will post their impressions online.

Will @SweViver be making videos of people’s impressions on each day or such? I know that’s a lot of extra work so no worries if not!

I’m really rooting for Team Pimax here and wish them as well as all attendees a super successful showing!

No HMDs lost by the carrier, no lack of GPUs and hardware systems, no last minute driver and/or firmware issues, no last second COVID outbreaks, no NDAs. Just showing the world what you have cooked up and what has been announced.

Yes for sure! Really hoping that Pimax indeed, as promised, will have the Varjo Aero available, so people can do a direct A-B comparison. If the general consensus then is that Pimax has beaten Varjo then that would be a huge milestone for Pimax! Good luck everybody!

It really is a great litmus test and mark of quality. If it can match the visual experience then the feature set and price will make it much more appealing. I expect the Aero will have superior build quality but that is reasonable enough imo and I don’t mind it not being quite so high quality in that regard if the other aspects are an improvement. Very exciting, tomorrow is the first day!

I think Crystals closest competition is the Focus 3. I don’t think they’ll have them there for anyone to do A/B tests. Focus3 is £1300 with all features enabled.

It’s good Pimax has a competitor and I’m sure it will be their best headset they’ve released until the 12k arrives.

I think Crystals closest competition is the Focus 3.

Well resolution wise it’s much closer/pretty much equal to the Aero. Therefore I think it makes sense to compare it mostly to that headset. It’s going to be interesting for sure, the Aero has some REALLY clear lenses, no fresnel so no godray’s at all and, I’m not sure how they did it, but it’s the only headset where my eyes feel 100% relaxed, just like they’d feel without wearing a headset. So they did a lot right and it’s going to be difficult for Pimax, or any other company, to come close to that. However of course the distortion is THE big disadvantage. Last time I used my varjo they had an experimental feature to combat distortion. People should make sure this feature is enabled, for me it helped a lot. But still, the distortion would be quite visible. If pimax somehow managed to do that better, then it’s going to be interesting. Also they could beat Varjo on the panel itself, the colors on the Varjo could definitely be better. And there’s some slight motion blur.

Also, the Varjo, at least the one I have, is 100% mura free. So that’s going to be interesting to compare. And then there’s the SDE but I don’t worry too much there. Contrary to popular believe you can see the pixels on the Aero. It’s easiest to see them in a blue sky (I think in a game like beat saber it will be difficult to spot them). You have to look really good to see them. I expect this to be the same on the Crystal, but in theory the pixel fill ratio could be different so the SDE might be slightly different.

So, interesting competition for sure!

well, it should be hard to beat the Focus 3’s massive glare and godrays.

Haven’t tried the Focus 3 but the VP2 was really a BAD headset, damn

Focus 3 is standalone first with no direct PC connection and almost half the PPD. I don’t see how they are similar tbh, the Quest 2 is basically a competitor at that stage. Crystal is all about clarity, it’s 35PPD while Focus 3 is like 21 or 22, no comparison really. Focus 3 is also enterprise, not consumer.

well, it should be hard to beat the Focus 3’s massive glare and godrays.

Well I’ll agree there. Focus 3 is definitely last gen In terms of lenses.

But let’s face it Crystal isn’t a released headset and we already know HTC are going to show a new headset at CES 2023 around the time Crystal launches proper.

The brightest VR people at HTC left years ago. I no longer expect miracles from this site.

i cant wait to hear and see the impressions !

Yeah me too. Very interesting for sure. Although one needs to keep in mind that demo’s like these usually don’t tell the whole story. I remember from the first 8k-X public demo people said that the ‘distortion was completely solved’ which was far from true. They did improve it somewhat but it definitely is still visible and does negatively impact at least my 8kx experience.

I think the fact that time is limited, the games being shown of course are limited and I think most people tend to at least slightly skew their experience to the better when asked on camera by the company. That being said, it surely is damn interesting and I’m looking forward to read the reviews. And possibly will attend myself in Florida, would love to see it with my own eyes.

BTW it could also be that the hardware is not the production hardware and that better lenses are being used than the production versions. Did pimax already comment on this? I remember a forum user talking about this not too long ago …

The brightest VR people at HTC left years ago. I no longer expect miracles from this site.

HTC doesn’t need them. Qualcomm provide everything. It’s why we have so many similar headsets all using the XR2 chipset. I’m sure there will be more.

What’s going to get interesting is when Deckard drops and we have native Stand-alone PC games. A lot of XR2 headset manufacturers are going to go bust overnight.

But that’s a future Pandora’s box cooking in the background.

I’ll sit with my Index and Pico 4 while I watch Pimax launch Crystal over the next few months.

Please for the people who will go tommorow,can you look if there is any MURA( Stare at a white or red back ground),Warping,distortion etc please…

@Axacuatl Could you please pay special attention to the Crystal’s black levels during the MRTV event. Just tried the Quest pro which is a huge let down with it’s terrible gray blacks. Interesting to know if the Pimax QLED panels have any advantage?

Pimax QLED panels have any advantage?