Obviously going to be seeing the Cambria launch at the event, will be interesting to see if the specs are as expected or if it’s another Quest 2 where the leaks were completely off. Considering there’s been a lot more leaked about Cambria than Q2, I think we won’t be seeing any surprises but who knows.

Anything else of note to the event or that anyone is particularly looking forward to?

I always love John Carmack’s talks personally. The Q&A part last year was pretty awkward with how seemingly handpicked and curated the questions being asked were but his usual unscripted talk beforehand was great. So hopefully as much of that as possible.

I guess we might get news on some games also, rumours are that 2 very big games will have release dates announced. Some are saying GTA and Walking Dead Saints and Sinners. I doubt GTA personally, probably Ghostbusters or Among Us (neither game I personally care about but I’m sure Among Us might cause some interest). GTA is actually a game I’m pretty excited for and interested in though, assuming they add in a decent but of VR specific mechanics and additions and not just on the level of a basic VR mod (not bashing VR mods, I love 'em, I just mean when you have proper access to the build of a game then it should be more than just placing you in the world with button prompts to interact with it).

Here’s a teaser pic of it (found on Reddit).

I’m really looking forward to gta sa news, i hope there’s an update and/or release date. TWD S&S2 news too would be cool.

I’m not that looking forward to the Cambria itself, the supposed specs don’t excite me. Hope there are some surprises.

Microsoft: Don’t forget me, I was a big shot in AR too. 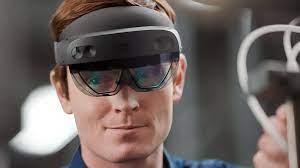