Fix for VR frame drops and stutters on NVIDIA cards

Actually, I could do it…

Great! Thanks for the pin!

Perfect! Finally after all this time Nvidia fixes this major issue. Now I think I will play VR more. Lately I’ve been so addicted to Call of Duty Warzone and Cold War that I get too lazy to put on a VR headset lol.

This is a hotfix but you cannot use precision x1, afterburner, rivatuner, fpsvr, etc - which makes it a bit worthless for the overclockers. If you use any of these apps, skip this until the full fix is done.

And this is exactly why I love the Pimax community; everyone’s looking out for each other. Thank you!

Do you have any idea why GPU monitoring tools don’t work with the fix?
I use FPSVR alot. 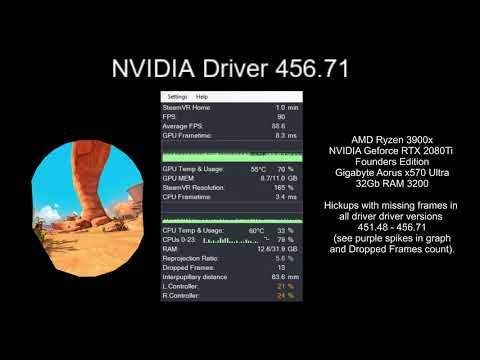 Do you have any idea why GPU monitoring tools don’t work with the fix?
I use FPSVR alot.

Or if they actually do not work with it. The last such hotfix from NVIDIA did nothing for me. I am thinking these hotfixes may actually resolve conflicts with specific background software that may be installed, while possibly creating new conflicts. As complicated as the chain of software/HDL stuff from CPU to USB controller stuff is these days, anything is possible.

So, maybe if you don’t have the specific software that may have a conflict, and if you have other software, these hotfixes could do more harm than good?

In any case, the fact is NVIDIA driver versions have been much more likely to have regressions over the past few years. Used to be that regressions basically didn’t happen. I guess their software development team is getting overworked, or the code is getting too complicated.

NVIDIA could of course just open source their drivers.

“How is it that nVidia always seems to have drivers optimized for the latest games when they come out?”

More like tweaking things to make the games that people are paying attention to work well and regressing all previous optimizations hoping we wont notice.

This explains why at launch the 3070 seems to be slightly behind the 2080Ti in terms of performance but try again and run the same benchmark in a year and suddenly the 2080Ti is 10% behind.

Im afraid maybe VR just got lost in the shuffle last may and they are only getting around to fixing it now.

It’s impossible for nVidia to optimize for everything right? Either that or their drivers are designed to be unoptimized.

It’s impossible for nVidia to optimize for everything right? Either that or their drivers are designed to be unoptimized.

From what I read a while back, NVIDIA used to be working around bugs in game engines, like rewriting a web browser for web pages that didn’t use proper ‘<html>’ tags. That is why every release of their drivers would bring 40% improvements to most games. That stopped happening shortly after Crysis, when the big game engines (Unity, CryEngine, Unreal) became dominant and most people stopped making their own.

Now, NVIDIA seems to be too busy trying to make developers use RTX, CUDA, and such that you can only get from them. Instead of like OpenCL.

Leaving real performance on both the hardware and software side to languish badly.

Anyway, back on topic. My point is we should probably start thinking of NVIDIA drivers in terms of this version may or may not help with whatever combination of installed software/hardware we may have.

Since I’ve got my 8K-X, I am so addicted to VR I have never been before. Since September last year, when I got mine, I am playing 90% VR only, just interrupting for a couple of event-related matches in World of Warships

On my new build and Windows installation, I already installed also a couple of games I’d like to play or finish, such as

Bioshock Infinite is one of those DirectVR supported games in Vorpx and looks as good as native. The whole series actually, plus Dishonored.

It’s so hard as humans to resist the urge to simply click update whenever that update notification happens.

My OCD just can’t seem to ignore that it’s there. As long as I know there is a more recent version the FOMO kicks in.

I should know by know with nVidia and Pimax later isn’t always better. It just means it’s less tested.

This explains why at launch the 3070 seems to be slightly behind the 2080Ti in terms of performance but try again and run the same benchmark in a year and suddenly the 2080Ti is 10% behind.

An official driver update has been released:

But it still requires that monitoring software be turned off.

Just to clarify - they have fixed it, partially as per dmel642 said above. Read it again - they fixed it without hardware monitoring running in the background. They are still working on another fix for when monitoring software is being used.

sorry, i just saw this

Now when i record with Nvidia ShadowPlay, it only records the “Desktop”, instead of showing
“Theater Environment”. pls i need this for my youtube channel & for myself.

After i removed the Display Port Adapter from TV HDMI & placed the the TV HDMI into Motherboard Onboard Graphics, The Nvidia ShadowPlay recorded “Steam VR” (But only 30 fps again) Main concern (Recording Steam VR 60 fps or higher) above!